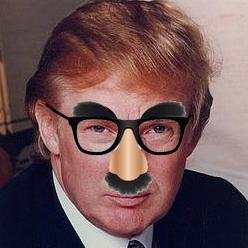 For anyone not following the news too closely, or in case you missed in the jumble of today’s rapid fire news headlines, there have been a number of stories in the last couple of weeks about how Donald Trump once posed as his own publicist in calls with reporters. Who cares. It’s weird, it’s nonsensical, it’s a little funny, maybe it’s a little creepy, but ultimately it’s irrelevant.

Except Donald Trump made it a story by lying about it.

This is revealing and disturbing for several reasons. First, because Trump’s first instinct is to lie. There was no equivocation, no slippery speaking, no playing for time, Trump says bluntly and directly,

Second, this should speak for itself on the character of the man, but apparently, given his status as the GOP nominee, it requires further exploration. Trump lies even about insignificant things. Why was his first instinct to lie? It shouldn’t matter. Laugh it off. Deflect it and say it’s irrelevant. Admit it flat out because how could this possibly hurt you? How would you feel about anyone else if, when confronted with something simple and direct, they’re first instinct is to lie? Especially over something fairly innocuous? Son, did you drink the last of the orange juice? Coworker, did you forget to refill the printer paper? Bureaucrat, did you give me the wrong form? Admitting to any of these silly examples would not be dire. I dare say, it probably wouldn’t even enter your mind that someone would lie to you over so simple a question. So how would you feel, how would you treat that person, if they did lie to you? Directly, immediately, to your face. Without delving too far into amateur psychology, there is something sad and off-putting about someone who cannot acknowledge even the slightest critique, embarrassment, or flaw.

Finally, we’ve already had 8 years of this attitude and are reaping the rewards. As just one example, think back to one of the first “scandals” of the Obama administration and the removal of Winston Churchill’s bust from the Oval Office. At the time, the administration said it never happened. Now, they admit it was removed and returned and say it was to make room for a different bust to fit the inspirational motif Obama wanted to establish for his presidency. Why they would lie about something so benign is as mind-boggling as how they were able to get away with it for so long. The fact that they did and were leads directly to Ben Rhodes laughingly admitting to lying point blank to the American people and Congress in order to reach an agreement with an avowed enemy bent on destroying us and our closest allies.

So where will we be in a few years? What will Trump administration officials laugh about conning the American people on? With his masterful manipulation of the media, there’s no doubt they will be able to do so leading to belly laughs over China negotiations? SCOTUS nominations? the wall? tax cuts? The signs and signals are all there for anyone who wants to pay attention.

Thank you to Ben Shapiro for sparking a thought, scaring the heck out of me, and making this so much worse. In his podcast, Shaprio points out the brilliance of Trump manipulating the media by constantly changing the subject. He’s able to do this through sheer bombast and outrageous declarations which the media simply cannot resist; and Trump is able to get away with it, even when spewing easily provable lies, because he knows the American people trust and like the media only slightly more than Congress. Just prior to these revelations, Trump was not having a good media cycle. Along comes this absurd story about Trump posing as his own PR spokesman, it gets traction because he lies about, and the media begins to chase its tail and dance to Trump’s tune; until he changes the subject, as he does every few days, with some new absurdity. So rather than use the force of his personality, rather than use the bully pulpit of a presidential nominee, rather than using his own intellect to change the subject and shift the narrative, Trump’s go-to move is to lie. Purposefully.