The more he speaks, the more the disastrous possibilities of President Trump begin to look like disastrous probabilities. Tom Nichols made the concise case against Trump by rating his duty as CinC above any other concerns; and by reminding us of one of those “best people” with whom Trump surrounds himself. Paul Manafort’s previous work as PR man for Ukraine’s former, pro-Russian President Yanukovych, plus Trump’s repeated praising of Putin paint a picture of the direction Trump would likely take the US in both domestic and foreign policy; and it is not a pleasant picture. Trump affirmed this speculation with this Tweet: 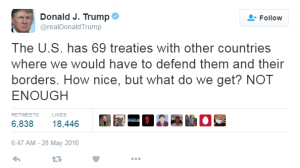 One of the first things to jump out from this statement is its utter cravenness. US foreign policy is going to become the mob shakedown. Hey, Taiwan, nice country you got there, would be a shame if anything happened to it. Then there is the pure ignorance of history and policy. What the US “gets” out of those treaties is a stable world. There are good guys, that would be us despite Leftist revisionism and attempts to the contrary, and there are bad guys in the world. When the US steps away from the world stage, when we fail to honor those treaties Trump laments, the bad actors of the world step in to fill the void. We had an agreement with Ukraine to protect their borders in return for their surrender of Soviet nuclear weapons; we ignored it and let the Russians engage in a proxy war which has put the whole region in a precarious position and enhanced Russian power. We have numerous agreements in the Pacific to check Chinese aggression, have not stood strong, and now the Chinese are pushing out in blatant violation of both international and national waters.

So what are principled voters of the Right supposed to do? Well, I may be losing my mind, but the more I watch Trump, the more I think on the dangers, the more I think a vote for Hillary may not be the worst idea in the world; just the second worst next to a vote for Trump. Now, let me preface this by saying, in the past, I have despised “tactical voting.” I’ve always felt there is just too much uncertainty and you can overthink things to dizzying degrees.

My thinking has always been: just vote your principles, hope for the best, and at the least, no matter the outcome, you can hold your head high. Except, as I’ve said before, in previous hold my nose and vote for his mushy guy I don’t like elections, there has been at least some basis for hope, some element of common ground. But what if there’s not even a glimmer of principle upon which to stand? Trump is diametrically opposed to Conservative principles. Unapologetically so. In that way, and in so many others, a vote for Trump is little different than a vote for Hillary. So why not just vote Hillary? If Trump is elected, no matter how disastrous his term, the odds of a primary challenge are highly unlikely if the panoply of former GOP critics who are now lining up and bending over is any indication. Moreover, with the specter of an impending economic disaster, the odds of a Trump reelection are extremely low while the odds of him, the GOP, and Conservatism being branded another Hoover are extremely high. A Hillary presidency would bear that burden and give a better chance of a principled Conservative in 2020; moreover, given her history, her high unfavorable ratings, and the fact she’s not the first black president, the odds of GOP opposition during her term is much higher than in the last eight years.

Now, of course, the pro-Trump crowd has been shouting but the Supreme Court! at their monitors, as it is their only real, rational argument. To that I would say, if you think one or even two or three justices on the Supreme Court would save us then you haven’t been paying attention and are dangerously myopic. DC vs Heller has been the “law” of the land for nearly a decade, and how has that impacted 2nd Amendment Rights across the country? Furthermore, the odds of Trump first picking, then have the will to expend the political capital to nominate someone like Bork or Scalia is highly doubtful. Most likely, we’d end up with another “Conservative” like Roberts. How, exactly would that save us? Our problems are much, much bigger than a few Justices flipping a couple close SCOTUS cases. As Mark Levin has been saying, we now live in a post-Constitutional era. How does Trump feel about the Constitution? What has he said or done to give you confidence he will redress this imbalance? If you really want to do something useful, may I suggest you educate yourself on the Article 5 Convention movement.

Now, all that being said, the Libertarian Party Convention has since concluded; and cemented my long-held belief Libertarians are worse than Leftists. Perhaps this deserves greater exploration later, but for now it’s clear the Libertarians would much rather be the hipster kids standing aloof and preferring to criticize everyone else while reassuring each other how they’re much cooler than everyone. The dissatisfaction with the country’s direction is palpable, and a significant percentage of the electorate do not feel either major candidate addresses those concerns. Finally, in this election, the Libertarian Party had a chance to step, enter the national conversation, and be serious contenders. Instead, they went with this:

However, barring Kristol’s surprise announcing being someone other than a Romney-style mushy moderate, they’re likely to get my vote for reasons both principled and tactical. While the worst excesses of the Libertarians drive me insane, I cannot envision a scenario wherein any of their worst lunacy actually becomes law. Moreover, when they are wrong, they are wrong on the side of personal liberty while the GOP errors of recent years have crushed the concept. So, on the off, off-chance Johnson becomes president, the country will at least, generally, move back in the right direction. Tactically, a strong showing for the Libertarian party would send a clear signal to the perpetually blind and stupid Beltway-right that it is no longer business as usual. The Conservative base of the GOP has had enough and will no longer hold our noses for you mushy moderates. More importantly, it would also signal to Conservative candidates breaking from the GOP is now a viable option when they continue their insular, DC-centric ways.

So, barring a shockingly un-Kristol-like revelation from Kristol today, I’m probably voting for the Libertarian nominees even though they’re not that Libertarian. Way to be like everyone else and follow the cult of personality over reason Libertarians. However, I’m still flirting with insanity. Trump is so abhorrent on a personal level, so disastrous to the Conservative movement, and such a danger to the country, if the polls near election day indicate a vote for Hillary is the only way to stop him, then I’m going to have to jump on that grenade.