By that, of course, I mean Detective Comics home of Superman, Batman, the Flash, and a host of other iconic heroes; there’s almost nothing to love about the other DC. When it comes to good guys vs bad guys, I never understood the appeal of Marvel’s more “real” and “relatable” characters. If I wanted to read about mopey and whiney youngsters I’d go hangout at the local high school and nod in agreement about how no one else gets it. Comic book heroes should have bold costumes in bright colors, they should have incredible origin stories, and they should fight larger-than-life, even sometimes outlandish, villains. Most of all, they should represent the best of us. They should be an allegory for what humanity could and should be. So it should be no mystery who my favorite superhero is.

It should also be no mystery where the hatred of his publisher comes from, whether you’re an avid reader of the comics or only familiar with his pop-culture persona. That being, though I may have ranked Marvel’s cast of characters below those of DC, I read a lot of Marvel titles because they always had better writing. While what they had to work with may have been lesser, the understanding of that content by both writers and editors was far greater. Marvel knew in what direction to take their titles and the writers knew how to get there with an enthralling tale because they really knew who their characters were, why they were, and how they connected with fans. In contrast, DC has followed the cunning strategy of “every ten years, you gotta give the universe an enema.” The result is a head-spinning mess which has made the supposed reasoning for Crisis on Infinite Earths, a 1985 multi-title crossover story intended to fix the continuity problems from a half-century of storytelling, backfire in a profound way and require greater Crisis-type story lines with increasing frequency. Moreover, and quite predictably, the urge to chase the next big crossover, the need to constantly throw everything out and start over, gets in the way of good storytelling when DC actually has a good story to tell; 2000’s serendipitous President Luthor story arc, for instance.

Now, to be fair, the President Lex Luthor storyline was something of a mess. Getting there required a good bit of stretching the readers’ disbelief and having people act a bit out of character–more on that problem in a second–but once they got there, it was a scenario ripe with possibilities for storytelling across all DC titles. Yet it never really went anywhere until its climax in the very well written Superman/Batman: Public Enemies story arc. Yet even that was left wanting because, once again, DC moved on to another big event and Lex Luthor’s resolution in Infinite Crisis was just a jumbled, dissatisfying mess which seemed tacked on as an afterthought.

Worse yet, even when they’re not getting in their own way with over-ambitious events, the mentality seeps through into the small scale and infects single character storytelling. Take for example my, and every other red-blooded American’s, favorite character in all of mass media: Clark Kent. Specifically, let’s look at the highly acclaimed Superman: Birthright which, while not nearly as bad as the utterly irredeemable Man of Steel, can be seen as the genesis for the destruction of the Superman franchise by its creators. The Clark Kent of Birthright may be the first mass media millennial protagonist; by which I don’t just mean demographically but in attitude. He whines, he mopes, he doesn’t finish college until 25 because he’s busy trying to find himself, and of course he argues with his father who just doesn’t get him. It may seem a small thing, but it’s integral to the character that Clark Kent as a young man isn’t trying to figure out what to do, he’s just trying to figure out how to do it. The idea that Jonathon Kent would strongly discourage his son from doing the right thing, from using his abilities to help others, can only come from a total lack of understanding of where Clark comes from.

And I don’t mean Krypton. It’s no accident the Superman who saves Metropolis comes from Smallville, Kansas. He comes from middle America, fly-over country, where people still go to church every Sunday, smile and say hi to strangers, lend a helping hand whenever possible and wherever needed, and a host of other things long seen as hokey remnants of a backwards era. Thus, I will never understand Hollywood’s obsession with killing Pa Kent. Or, in the case of Birthright, turning him into a jerk. Or, in the case of Man of Steel, turning him into a jerk and then killing him. Ma and Pa Kent are Clark’s, and thus our, connection to where he came from and who he is no matter that he lives in the big city now and thwarts alien invasions or a telepathic talking gorilla. When done well, like in the animated series, every scene may be short but impacts Clark on a personal level and thus the viewer as well. One of the best would have to be the short written by Jeph Loeb for Superman/Batman #26 after the passing of his burgeoning young colleague and son, Sam. Titled simply “Sam’s Story,” Jonathon Kent puts his arm around the already strongest man in the world and channels the heart and mind of fathers everywhere who have had to comfort a child with the untimely passing of a friend, the loss of a beloved grandparent, or even the family pet. He keeps his child focused on the positive, on the good things in life, on the happy memories, on the blessing of those experiences, while also saying it’s okay to cry and to hurt and to miss. If you don’t get choked up over that, then you probably didn’t cry at Field of Dreams or The Dirty Dozen either, and I don’t think we can be friends anymore. 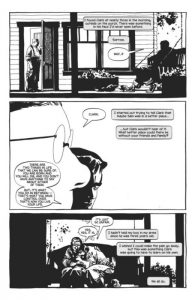 When I said my favorite character was Clark Kent, I did so on purpose. DC’s recent failings with the Superman franchise can really be boiled down to that one flaw. Superman is the alter ego, not ace reporter Clark Kent. Aw shucks, ma’am and sir, holds the door open for strangers, Clark Kent is the Superman. The cape and costume, that’s to protect Kent and his friends from the bad guys of the world. The hat and the glasses aren’t the disguise Superman puts on and if you think they are, then you can’t possibly write a decent story–whether in DC’s most recent reboot or their disastrous movie universe–because you’ve completely missed the core of the character and your first step was in the wrong direction. That’s Batman. Stop trying to make every character Batman. Let Batman be Batman and let Superman be Superman. That’s why the best of both characters are when they’re together, written by someone who really understands the origins and motivations of each individually, and shows how they’re the same yet completely different. Again, go read Jeph Loeb’s incredible work with the characters for a contained synthesis of who they both are from a character perspective while being entertained with incredible stories. The art of Superman should be done in bright colors, because its an allegory for the persona and outlook of Clark Kent. He’s driven to do good because he was raised seeing the good, seeing the humanity’s best potential. In contrast, the shadows and dull colors of Batman reflect a man who has seen the worst humanity has to offer and is trying to protect others from those same circumstances. Bruce Wayne died the same night as Thomas and Martha. If all the bad guys were suddenly defeated and the world made safe forever, Clark would gladly pack away the cape and live happily ever after with Lois. Batman can never put away the cowl.