Republicans are still riding high after the sweeping GOP victories up and down the ballot. Certainly looking at the electoral map it would seem the country is awash with Republican support; so much more so with a county level map which shows a sea of red. Rush Limbaugh declared the election a conclusive victory for Conservatism. This is the same man who has been relating the tale of the ’94 GOP victory for more than two decades now. When invited to speak before to the incoming Republicans, who were now the majority for the first time in 40 years, Rush was cautionary, rather than victorious, telling them not to think this meant the Right had won and they could give up teaching and fighting for Conservative causes. Too true.

Perhaps we’ll get to the philosophical debate along this train of thought at a later junction, but for now let’s simply look at the numbers. First things first, let’s dispense with this nonsense of a racist election. Donald Trump won a slightly higher percentage of Hispanic and black voters than Mitt Romney did in 2012 but actually LOST a percentage point of the white vote. 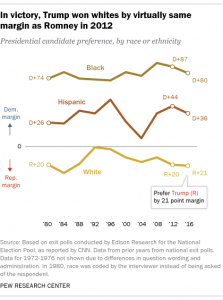 The big surge for Trump came from voters without a college degree, a usually reliable Democrat voting bloc. How does it make any sense that this election was based on racism when: “Of the nearly 700 counties that twice sent Obama to the White House, a stunning one-third flipped to support Trump.”

Part of the Left’s continuing meltdown over the election results–beyond their deep seated hatred for the Right–stems from their complete shock at the results. Yet again, we must dispense with nonsensical assertions but this time on the Right. There was no vast “conspiracy,” the system isn’t “rigged,” and the media and pollsters weren’t engaged in systemic “lies” they were simply wrong. They were wrong about America and the Right for the same reason they always are: deeply ingrained bias.

As an aside, it does prompt a good bit of eye-rolling to hear the same media which has been beating the drum of “Bush lied! Kids died!” since 2003 try and use the excuse of incompetence not nefariousness which they never worked for Bush or his defenders. This bias, which they continue to claim they do not have, kept them from fairly evaluating the mood of the electorate to the extent they criticized Nate Silver for daring to give Trump a nearly 30% chance to win in his final polls. To which he responded, “There was widespread complacency about Clinton’s chances in a way that wasn’t justified by a careful analysis of the data and the UNCERTAINTIES surrounding it.” [emphasis added]

For the media, it was a one-sided election in so many ways. Not just in coverage or how “obvious” it was Trump would lose, but they focused so intently on Trump and all his negatives they failed to rationally evaluate Hillary as a candidate. That one-sided view of the election created confirmation bias which was reflected in both the reporting and the polling. To forecast elections, pollsters must make assumptions on who will actually show up and vote for whom and where. Steve Berman at The Resurgent sums up those failed assumptions:

In their defense, however, Trump is truly awful. On the other hand, as an indictment, Hillary is absolutely horrible; and the media failed to recognize how much of the country thought so even if the media thought she was varying degrees of wonderful. But again, that’s a failure of interpretation not of the polls themselves which were, in reality, very close to the outcome.

But if it’s true Trump was such a terrible candidate, with the second highest negatives ever, repeated reporting of no ground-game, scandals and meltdowns every week or two, then how did he manage to win? Too many on the Right have been quickly leaping to proclaim Trump’s win a total victory over the mainstream media. John Nolte has been espeically gleeful in pronouncing the media dead. Yet even more reasoned analysis still includes American distrust of the media on its lists. This seems a little premature given the media was supposed to be over with the rise of Rush. Then Fox News. Then Drudge. Then the Conservative blogosphere. Then Rathergate. Then…is the deceased equine sufficiently flogged?

Trump won primarily because he was running against a candidate every bit as horrible as himself. Leaked emails revealed Hillary and the Democrats worked behind the scenes in the GOP Primary to help Trump along because they thought he would be an easy candidate to defeat. Yet once Trump won the nomination, there didn’t seem to be a plan beyond running out the clock and letting the media do all the work. Kellyanne Conway noted Hillary has a habit of being “caught unaware.” In 2008 against Obama, then again by Sanders, and finally by the Trump campaign on election day. This is because Hillary is not an actual politician but a schemer and manipulator. The only elections she’s ever actually won were in a dark blue state where the Democrat machinery could ensure victory. Hillary supporters loved to point to her long years of public office as proof of her qualifications, yet when pressed have trouble coming up with a single accomplishment. Hillary was the Democrat’s Bob Dole. Granted, in one sense that’s a horrible analogy because Dole was a genuine war hero who the Left mocked while Hillary’s only real accomplishment is somehow becoming filthy rich through public service. In a political sense, however, it works because both were their party’s nominee primarily because it was their turn; it was a party decision rather than a genuine decision of the people and both lacked anything resembling broad enthusiasm or support. Both ran primarily as “the other candidate is worse.” Moreover, this combination of arrogant complacency and corrupt incompetence. Trump’s only appeal was as a cult of personality and, to his credit, he recognized that fact and out-campaigned Hillary down the stretch in key swing states getting invaluable face time with voters while Hillary “never traveled to Wisconsin during the 102 days between the convention and the election.”

Yet it is precisely this key to victory, this Cult of Trump, which should be the greatest cautionary tale for Republicans moving forward. The personal appeal of Obama proppeled him to victory but the Democrat Party paid a heavy price over his two terms:

“The party has 11 fewer Senate seats, 63 fewer House seats, and more than a dozen fewer governorships, than when Obama took office. Democrats lost more than 800 seats in state legislatures, and control both the governor’s mansion and the legislature in just six states. The Republican party, on the other hand, is the most dominant it’s been since the 1920s.”

If Trump is following the pattern of Obama then it might be good for him and keeping the Whitehouse in four years but could spell disaster for the rest of the GOP and down-ballot offices even to the state and local levels. Yet there is ample evidence Trump’s following and appeal is not nearly as strong as Obama’s giving cause for concern when it comes time for reelection. In four key swing states, Arizona, Ohio, Florida, and Wisconsin, “Donald Trump’s average margin of victory was 3.5%. For the Senators, their average margin of victory was 12%.” This indicates Trump’s base may be very wide, but is incredibly shallow.

Now it may be that it won’t matter. It may be that Trump’s victory, rather than an aberration, is a paradigm shift indicating a traditional ground-game with a traditional candidate is now irrelevant in the face of social media and a celebrity obsessed culture. But even if that’s true, what happens when the Left wakes up to that fact? The Left has plenty of celebrities from the more politically active like DiCaprio to those seen as apolitical like Hanks. This election was far closer than almost every Right leaning pundit seems to realize or perhaps wants to admit. Trump won because he was running against the only candidate he ever had a chance at beating. Even still, the turnout was so low and the contests of key swing states so close that one wonders why Hillary didn’t select Bernie for her VP and if locking in his base would have clinched the election for her.

In conclusion, this could, of course, be completely wrong. Trump proved almost everyone wrong by winning the nomination, then again by winning the election, so maybe his ardent supporters will be right again and he’ll govern by doing the opposite of almost everything he said and thus be a second coming of Reagan and Coolidge leading America to unprecedented greatness. But history and common sense indicate that is far from likely. But if the predictions of doom and gloom turn out to be as wrong from President Trump as they were for Candidate Trump, let us still never, ever do this again. With his win, the GOP got lucky. All evidence pointed to the opposite being true and unless the Democrats run Hillary again the result will not be so unexpected. Likewise, if he governs wonderfully, it will also be a surprise since almost everything he’s ever said indicates we’re in for a disaster of tariffs, trade wars, nationalized healthcare, and siding with the wrong people overseas. To guard against such outcomes, let’s recognize what actually happened in this election not what we’d like to have happened.

**Update 12/16/16** The Hillary campaign was even worse than we already knew. Politico released a major story on December 14th revealing a campaign which was every bit as out of touch as the mainstream media. When workers on the ground told Clinton HQ they were in trouble, Clinton HQ ignored them. When workers wanted to shift resources and personnel to Michigan, they were denied while resources were kept in Iowa where Clinton had no chance. More laughably, worried about losing the popular vote while winning the Electoral College thanks to the “Blue Wall,” the Clinton campaign shifted resources to get out the vote campaigns in Democrat safe havens like New Orleans and Chicago. Yet Democrats, and most of the media, continue to blame absurdities on Hillary’s loss. At this rate we won’t have to worry about them figuring it out and running a Clooney or a Hanks in 2020.